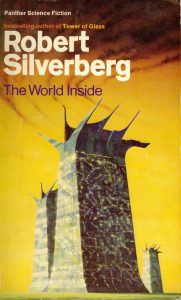 Both authentic Tantra and Neo-Tantra include practices that ask the practitioner to experience oneness with your lover, those around you, your village, your city, your country, the whole planet and the whole universe.

Vijnana Bhairava Tantra, which Osho called “the Book of Secrets”, includes several such techniques. In particular Dharana 081 (Sloka 104) presents a very advanced type of meditation, which calls for a state of mind that realizes “I’m everywhere”. It’s not an easy state to put one’s mind in, but sometimes a helpful support can be found. I am always on the lookout for such expressions that just appear one day in front of me and I tremendously rejoice in finding these, as they help me to practice this incredibly blissful state.

It happened when I was listening to Robert Silverberg’s “The World Inside“, which is a fascinating masterpiece of science fiction. While listening to the last segment of chapter 3 of that book, I have experienced a proximity of this state, attuning myself to the vibration masterfully depicted by the author. The following excerpt is about one of the main characters, Dillon, who is trying a unique multiplexes drug and as a result experiencing oneness with 881,000 people, which is the population of one building some time in the future. This particular book explores a model of taking 1 million people, putting them all into one “box” and modeling how they might go about it. And here is the relevant excerpt:

He says, “I have to tell you about my trip. I’m on a multiplexes. It’ll hit me in six minutes.”

She puts her hand to her lips. “We don’t have much time, then. You ought to be inside me before you go up.”

“Is that the way they work?”

“I’ve never gone that way before,” he confesses. “Never got around to it.”

“Neither have I. I didn’t think anybody actually did take multiplexers, really. But I’ve heard of what you’re supposed to do.” She is disrobing as she talks. Heavy breasts, big dark circles around the nipples. Her legs strangely thin; when she stands straight the insides of her thighs are far apart. There is a folkmyth of some sort about girls built that way, but Dillon cannot remember it. He drops his clothes. The drug has started to get to him, several minutes ahead of schedule-the walls are shimmering, the lights look fuzzy. Odd. Unless the fact that he was already way up from performing should have been calculated into the dosage request.

The metabolism turned to high, maybe, on nothing but sound and light. Well, no harm done.

He moves toward the sleeping platform. “What’s your name?” he asks.

“Get in,” she says. “It’s all right. I get wet fast there.” He enters her. Her tongue against his; her sinewy thighs encircling him. He covers her body with his. “Are you grooving yet?” she asks.

He is silent a moment. In and out, in and out. “I feel it starting,” he tells her. “It’s like having two girls at once. I’m getting echoes.” Tension. He doesn’t want to wreck everything by coming before the effect hits him. On the other hand, if she’s the quick-coming type, he’d be happy to let her have a spasm or two; the multiplexing must still be ninety seconds away.

All these calculations chill him. And then they become pointless. “It’s happening,” he whispers. “Oh, god, here I go up!”

“Easy,” Alma murmurs. “Don’t rush anything. Slow … slow…. You’re doing fine. You want this one to last. Don’t worry about me. Just go on up.”

In and out. In and out. And multiplexing now. His spirit is spreading out. The drug makes him psychosensitive; it breaks down his brain’s chemical defenses against direct telepathic input, so that he can perceive the sensory intake of those around him. Reaching wider and wider, moment by moment. At the full high, they say, everyone’s eyes and ears become your own; you pick up an infinity of responses, you are everywhere in the building at once. Is it true? Are other minds pouring their intake through his? It does seem so. He watches the fluttering fiery mantle of his soul engulf and absorb Alma, so that now he is face up as well as face down, and each time he thrusts deep into her hot cavern he can also feel the blunt sword sliding into his own vitals. That’s just the beginning. He is spreading over Alma’s tittles now. The unfleeced nine-year-old. The gurgling baby. He is six children and their mother.

How easy this is! He is the family next door. Eight tittles, mother, nightwalker from the 495th floor. He extends his reach upward one level. And downward. And along the corridors. In dreamy multiplexication he is taking possession of the whole building. Layers of drifting images enshroud him: 500 floors above his head, 499 below, and he sees all 999 of them as a column of horizontal striations, tiny notches on a tall shaft. With ants. And he is all the ants at once. Why has he never done this before? To become an entire urbmon!

He must reach at least twenty floors in each direction now. And still spreading out.

Tendrils of him going everywhere. Just the beginning. Intermingling his substance with the totality of the building.

With Alma rocking beneath him. Pelvis grinding against pelvis; he is dimly aware of her as she softly moans her pleasure. But only one atom of himself is occupied with her. The rest is roaming the halls of the cities that make up Urban Monad 116. Entering every room. Part of him up in Boston, part of him down in London, and all of him in Rome and Bombay as well. Hundreds of rooms. Thousands. The swarm of biped bees. He is fifty squalling tittles crammed into three London rooms. He is two doddering Bostonians entering upon their 5,000th sexual congress. He is a hot-blooded thirteen-year-old nightwalker prowling the 483rd floor. He is six swapping couples in a London dorm. Now he is into a wider range, reaching down to San Francisco, up to Nairobi. The farther he goes, the easier it gets. The hive. The mighty hive. He embraces Tokyo. He embraces Chicago. He embraces Prague. He touches Shanghai. He touches Vienna. He touches Warsaw. He touches Toledo. Paris!

Reykjavik! Louisville! Louisville! Top to bottom, top to bottom! Now he is all 881,000 people on all thousand floors. His soul is stretched to its fullest. His skull is snapping. The images come and go across the screen of his mind, drifting films of reality, oily wisps of smoke bearing faces, eyes, fingers, genitals, smiles, tongues, elbows, profiles, sounds, textures. Gently they mesh and lock and drift apart. He is everywhere and everyone at once.

God bless! For the first time he understands the nature of the delicate organism that is society; he sees the checks and balances, the quiet conspiracies of compromise that paste it all together. And it is wondrously beautiful. Tuning this vast city of many cities is just like tuning the cosmos group: everything must relate, everything must belong to everything else.

The poet in San Francisco is part of the grubbo stoker in Reykjavik. The little snotty ambition-monger in Shanghai is part of the placid defeated Roman. How much of this, Dillon wonders, will stay with him when he comes down? His spirit whirls. He grooves on thousands of souls at once.

And the sexual thing. The hundred thousand copulatory transactions taking place behind his forehead. The spread thighs, the offered rumps, the parted lips. He loses his virginity; he takes a virginity; he surrenders to men, women, boys, girls; he is agressor and aggressed; he spurts ecstasy, he narrowly misses orgasm, he triumphantly impales, he shamefully suffers loss of erection, he enters, he is entered, he takes pleasure, he gives pleasure, he retreats from pleasure, he denies pleasure.

Occasionally he has wondered what life is like in the other buildings that make up the Chipitts constellation. Now he does not care. There is wonder enough in 116. More than 800,000 intersecting lives. He has heard some of his friends say, in San Francisco, that it was an evil deed to change the world this way, to pile up thousands of people in a single colossal building, to create this beehive life. But how wrong those mutterers are! If they could only multiplex and get true perspective. Taste the rich complexity of our vertical existence. Going down! 480, 479, 476, 475! City upon city. Each floor holding a thousand puzzleboxes of pure delight. Hello, I’m Dillon Chrimes, can I be you for a while? And you? And you? And you?

Are you happy? Why not? Have you seen this gorgeous world you live in?

What? You’d like a bigger room? You want to travel? You don’t like your littles? You’re bored with your work? You’re full of vague unfocused discontent? Idiot. Come up here with me, fly from floor to floor, see! And groove on it. And love it.

“Is it really good?” Alma asks. “Your eyes are shining!”

“I can’t describe it,” Dillon murmurs, soaring, threading himself down the service core to the levels below Reykjavik, then floating up to Louisville again, and simultaneously intersecting every point between root and tip. An ocean of broiling minds. A sizzle of snarled identities. He wonders what time it is. The trip is supposed to last five hours. His body is still joined to Alma’s, which leads him to think he has not been up more than ten or fifteen minutes, but perhaps it is more than that. Things are becoming very tactile now. As he drifts through the building he touches walls, floors, screens, faces, fabrics. He suspects he may be coming down. But no. No. Still on his way up. The simultaneity increases. He is flooded with percepts. People moving, talking, sleeping, dancing, coupling, bending, reaching, eating, reading. I am all of you. You are all parts of me. He can focus sharply on individual identities. Here is Electra, here is Nat the spectrum-rider, here is Mamelon Kluver, here is a tight-souled sociocomputator named Charles Mattern, here is a Louisville administrator, here is a Warsaw grubbo, here is. Here is. Here are. Here am I. The whole blessing building.

Oh what a beautiful place. Oh how I love it here. Oh this is the real thing. Oh!

Honestly, I’m not sure whether you had just as an amazing experience reading it as I did, because I originally read it in the context of the book. I hope it worked at least to a degree, so that you could have imagined the possibility to experience oneness with all. Perhaps one day you’d read or listen to that book and have a more powerful experience.

Imagine if that kind of drug were available to humans, and what kind of impact it’d have on our society and our lives as individuals.

If you take a bit of time to contemplate this state of oneness, how do you think it’d affect your life and the lives of those around you if you were able to experience that state, even only some times?

p.s. I highly recommend Robert Silverberg‘s sci-fi books – I read many of them, and each one is very unique, very thought provoking and always very engaging to the last moment.